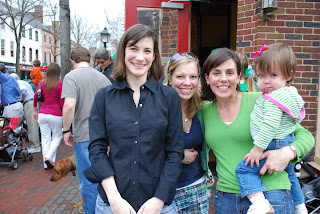 The calm before the storm: Me, two of my best friends Melissa S. and Kristin, and Kristin's little girl, LEW, at the annual Old Town St. Patrick's Day Parade on Saturday, March 7, 2009.

WARNING: THIS IS A VERY LONG ENTRY. DON'T ATTEMPT TO READ IT UNTIL YOU'VE GOT SOME EXTRA TIME ON YOUR HANDS.

I had no idea that I was about to learn that I had cancer when I went to the doctor on Tuesday, March 10, 2009. I thought the worst news I'd hear from my doctor, Dr. G., was that I had severe endometriosis that was going to make it nearly impossible for me to get pregnant someday. I thought this even after seeing the grave look on my doctor's face in post-op following my D&C procedure the week before, when he said, "I'm now very concerned about your ovaries but we'll talk about it when I see you on Tuesday." He didn't have the pathology back yet on the polyp he'd just removed from my uterus but he had seen what was inside me (and had re-read a radiologist's final ultrasound findings report about my ovaries) and he knew.

I guess I feel lucky that I hadn't thought that cancer was a possibility. I mean, as you can see from the above photo taken at a local St. Paddy's Day parade the weekend before I found out about my cancer, life was pretty stress-free before hearing the "C" word, which I'm grateful for because it sure hasn't been ever since. I'm not a worrier by nature (to the contrary, I'm kind of a "rule breaker" and can be somewhat reckless at times as many of my more well-behaved friends will attest to) and despite nearly a year of weird, whacked out bleeding that I discussed with Dr. G and just about every one of my girlfriends who would listen, the thought never occurred to me that this could be cancer. I think the thought hadn't occurred to me because: 1. I had been on the Pill (and then the Ring) for over 12 years, which should have protected me from this kind of cancer. 2. I am a thin, healthy, gym rat whose (relatively) flat stomach put me at event less risk for this disease. 3. I have no family history of this particular kind of cancer. 4. I am only 32-years old!!! 5. I feel (well, felt anyway) great and had no real pain to speak of...or did I? And the list goes on and on. So, back to March 10...