Winter of My Discontent: Saturday, February 6, 2010

Yes, I do realize that I'm misusing this reference to Shakespeare (if you don't know what I'm referring to, look it up!) but it just seemed an appropriate title for the post since I'm pretty miserable on this blizzardy winter day. Why am I miserable? Oh, I don't know, maybe it's because:

I'm overwhelmed with nearly every aspect of my life -- from the things I have to do, to the things I think I should do, to the things I want to do. It's all just totally overwhelming to me. Totally. I would list everything -- which ranges from searching for all of my 2009 medical receipts in order to write-off my medical expenses, to writing long-overdue Christmas thank you notes, to launching the Junior Committee (fundraising committee) for the Ovarian Cancer National Alliance -- but honestly, if I did, you'd fall asleep before finishing the list. It's long and I just don't know where to begin.

I'm sick and tired of dealing with the Plantar's wart removal wound on my heel, which frankly, has caused me as much pain and suffering as my hysterectomy incision (just the incision, not the aftermath of the hysterectomy). Maybe more, actually. If you saw the bottom of my heal, you'd lose your appetite. Guaranteed. Despite its grotesque appearance, the real thing that's bumming me out is that it's keeping me from working out and everyone who knows me knows, that ain't good. I'm like a thoroughbred horse that has to be exercised everyday. Thus far, I've only managed about an hour and forty minutes on the stationery bike in the last 10 days. Not good. At all.

I know someone who has escaped this weekend of snowy misery (about 18" at press time) while I'm stuck here to shovel, pray that the power doesn't go out (I'd really lose it then!), eat all of the unappealing morsels of food in the house, and ponder when I'll be able to drive again. I mean, I'm happy for those who could escape but misery does love company after all, right?

My hair is growing back in a less than desirable fashion. I know I should just be happy to have hair on my head but I had such high hopes for how it would grow in and now, alas, those hopes have been dashed. My post-chemo hair sucks. Plain and simple. It's kind of wirey and very wavy and I have a curly rat tail developing in the back. Please see photo below and then try to tell me you wouldn't be equally miserable if your hair was growing in that way? 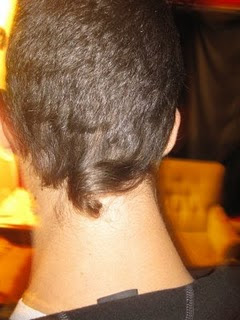 That's not me, by the way, but it's really that bad (check out http://rattaildreams.blogspot.com/ for some awesome examples of rat tails). And while I could cut it, it's going to have to grow someday so why not now? I'm so desperate about this situation that I actually googled, "How fast does hair grow?" last night and discovered that it grows at a rate of about .5" per month, which is what I thought. I can only imagine how great my new style is going to look for my brother's wedding in humid Charleston, SC during Memorial Day weekend, which is just a short 16 weeks away. I suppose if I'm really disgusted with how it looks, I could just shave my head and make Brenda join in the festivities. I miss Brenda! To clarify, I don't miss having to wear a wig but I liked that hair. It was the best hair - not style, just hair - I ever had and I miss it. I miss the texture. I miss the color. I miss it. Okay, I better shut up so as to avoid a "be careful what you wish for" scenario someday in the future.

I'm gaining weight. Everyday. Well, maybe not everyday but I've continued to gain weight following treatment and it's upsetting to me. I think I'm about 126 lbs right now, which is about 10-13 lbs lighter than my all-time high. While I know 114 lbs may not have been optimal, I really liked being super skinny and having much smaller hips than I've had since the 9th grade. I know some of the weight gain is muscle, as I've been working out with a trainer and swimming a ton, but a lot of it isn't. I'm still doing (or, at least trying to do...) the anti-cancer diet but let's face it, it's hard when you're social life is back in full gear. I really wish I didn't have such a wicked sweet tooth. It would all be so much easier. Sigh.

My constant hot flashes. They come at the most inopportune times and they interrupt my sleep. They just suck.

Yep, I think that just about sums up the list of my grievances.

Perhaps I'm starting to experience the post-treatment crash that so many cancer survivors experience when they re-enter the real world? It's a world in which their friends and family expect them to just pick right back up and resume life as normal because they look healthy again and aren't puking on a regular basis. But it's not the same world they left the day they were diagnosed. This new world is filled with a much different (better?) perspective on many activities of daily living, as well as a much, MUCH shorter attention span. It's often a lonely and frustrating place -- one that, as you already know, you really don't ever want to have to experience.

Or, perhaps, Old Man Winter has just finally got the best of me after the second consecutive weekend of crap weather? I mean how much snow can one gal raised in the mid-Atlantic region take? This is just not what we're programmed for. The occasional 4-6 inches that gets you out of work on a weekday? Sure. Bring it! But this?!? This is INSANE. And I think it's making me go crazy, slowly but surely.

Well, first, I'm going to wrap up this rant because while it's therapeutic to bitch sometimes, I really need to stop wallowing in my misery. Second, I think I'm going to hobble outside to shovel again so as to make sure I can get out of my house if I need to for some reason. Although, what that reason would be, I can't imagine. And then, maybe, just maybe, I'll actually start to tackle some of the things on that daunting to-do list.

Wish me luck on both getting some stuff done and snapping out of it!


Who is this girl?