Wow! A lot has happened since I last wrote in late April. It's hard to believe it's been nearly two months since I've checked in but, as usual, I've been a busy (and thankfully, happy!) gal. So, here's the rundown of the many events, or passages, if you will, that have occurred since I last wrote:

First, on the happy news front, there have been a couple of births since before I last wrote (apologies to the Brisendines and Whitmans for the delayed mention). Brooks Andrew Brisendine was born to my dear childhood friend, Elena, and her husband, Briley, on February 25th. As you'll see below, Brooks is a happy, beautiful little boy and I was so thrilled to spend time "talking" with him on a couple of recent trips to Atlanta. 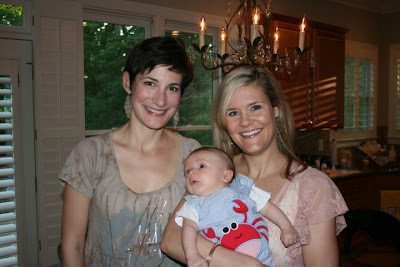 A pre-dinner shot of me (check out the straight-ish hair!) with Brooks and his mommy, Elena.

On April 6th, the Whitmans welcomed their second daughter, Katherine Phillips Whitman, to the world! It was a special treat to meet her on her actual birthday when I delivered yummy Atlantis to her hungry daddy, Shawn. Katherine is just as cute and sweet as her older sister, Lauren, and I had the pleasure of introducing her to a potential future boyfriend, Alex Tulkki, when he made the trek east to visit the Alexandria gang in late April. I think they hit it off! 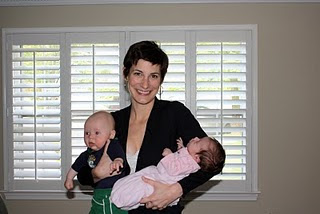 Let's see what other happy passages have occurred recently? Well, I guess these two are both bittersweet to a certain extent but since I'm a glass half-full kind of a girl, I think they're mostly happy. Two weeks ago my Grandad moved down from Delaware to Greenspring Village - the best retirement community in the world in my opinion - to be closer to the Alexandria McGihons. It's bittersweet because in order to do so Grandad had to leave behind his wife, Grandmary, who suffers from late-stage Alzheimer's. I know it was difficult for Grandad to leave Grandmary (she is in good hands in Delaware, though) but since he's had his own health issues over the past year and since Mary doesn't really know who any of us are anymore and is very frail, I'm happy to have him close by and in a thriving community where he can enjoy his time. Continuing with grandparent updates, my grandmother, Denny McGihon, just celebrated her 80th birthday this week! While she may not be celebrating being another year older, she should celebrate being a great example of longevity - both in the physical and mental sense. Granny has had her own challenges with a sick spouse over the past year so I was happy that they could be together and feeling well for her birthday celebration. And now that life seems to be back on track for me, I'm looking forward to a trip out to Denver to spend time with her and my grandfather, Clark, later this summer.

And in other news, I've been helping a few friends deal with some far less pleasant passages of their own. One good friend's nearly six-year marriage is ending later this month. I was a bridesmaid in her wedding and it is sad to see something that was once filled with so much promise come to an end for reasons none of us can really understand. I've been helping her try to embrace the single life (...and decorate her adorable new carriage house!) as much as is possible while the wound is still so fresh. And another friend was forced to abandon the urban home and lifestyle that she and her family loved for a new one in the 'burbs. I've tried to demonstrate that life in the 'burbs ain't so bad but I know it's a big shock to their system and not one they would have chosen. And finally, yet another friend has had to help her parents pack up and sell her childhood home so that they could move to a town and home better suited for the daily trials of her father's Parkinson's disease. While it feels good to give back to some of the many people who helped me during my wellness campaign, I'd rather they not have to face these challenges at all. But, like what I kept telling myself last year at this time, better days are ahead for all of them. I don't think it; I know it. It turns out that my dad was right when he said that things always get better (...by the way, he told me this when I was in 4th grade and had very few friends -- I think you'll agree, I've got plenty now!).

Oh, yes, and there's another passage to report: My good friend, Melissa Maclin (or "Mac" as we call her) is on her way to Afghanistan yet again. We had a good bye dinner for her the other night at Christy's restaurant. This passage is definitely bittersweet as it's wonderful to get together to wish her well and welcome her home but we all worry about her while she's overseas. 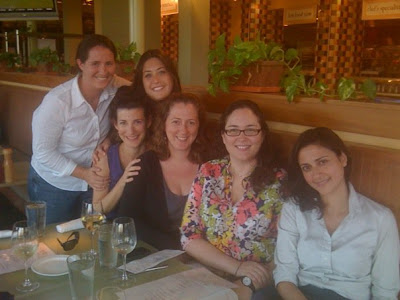 Mac's goodbye dinner at Food Matters: Mac, me, Melissa R., Christy, Kelley, and Christina, who was in town from NYC. Be safe, Mac!

There are many other less important passages that have occurred recently as well:

The official start of summer! Yay!

My first trip to NYC in nearly a year where I spent time with Christina, Ali, and Skei in Brooklyn and where I met Kavitha's baby girl, Sasha, before we headed out for the most delicious sushi I'VE EVER HAD!

My registration for this fall's sprint triathlon and Team Hope, which is the OCRF's fundraising team for the race! (You'll hear much more about that later...)

The two-month countdown to my next birthday! (Today! I wonder if both of my birthday wishes will come true?!?)

Oh, yes, but there is one final passage that occurred recently and it was both BIG and HAPPY. It's the one that happened almost a month ago in Charleston during Memorial Day weekend when my "baby" brother, Bobby, married his long-time girlfriend, Ansley. The weekend's festivities reminded me (and others) what a difference a year can make in one's life. Last year, during the same weekend, I was very ill from my first chemo treatment and was recuperating in Charleston. Me, my mother and good friends endured a weekend filled with much bleeding, fainting, puking, and bone pain (...but some good times too!). My brother was there to help me that weekend by running out to pick up my Vicodin prescription from the drugstore. So, you can imagine, that it was quite wonderful to be there again this Memorial Day feeling well - and with reasonably good hair -to celebrate this happy occasion. As you'll see below, it was not only a beautiful wedding but a very fun one as well! 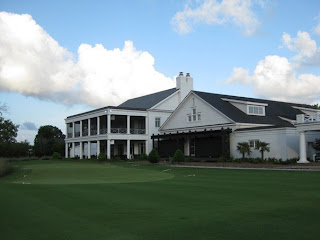 The Daniel Island Club where the wedding and reception took place. 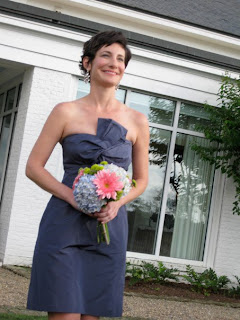 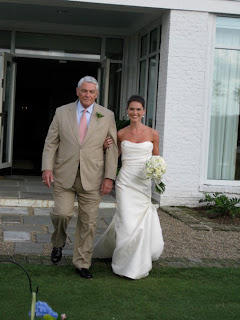 The proud papa escorts the bride. 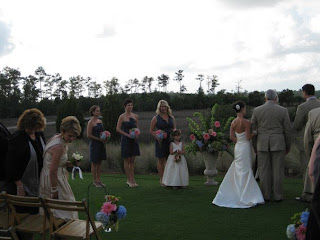 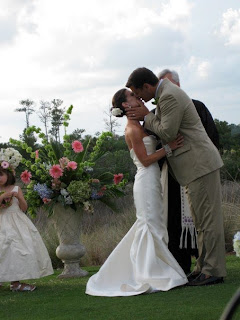 You may kiss your bride! 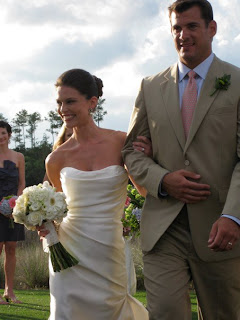 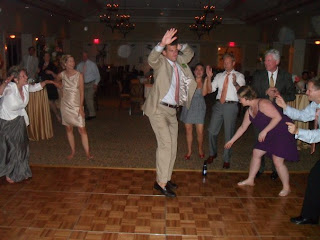 Okay, clearly a big jump from the last picture to this one! 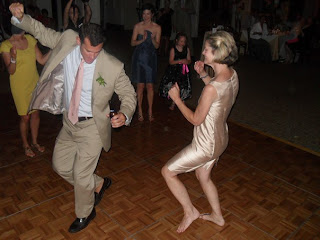 Bobby and my mom bustin' a move. 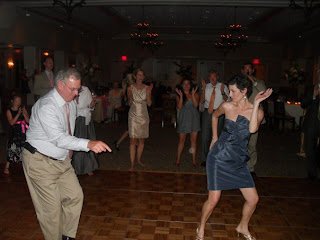 Dad and me doing our thing. Hard to believe I was bald and 15 lbs. lighter just 9 months ago!

So, that just about sums up the passages of the last two months. I'll be back again soon to report out on my 9-month check-up (yippee!), my triathlon training and fundraising, and other things.

Until next time, be well.