I have put more consistent effort into my personal appearance over the last two or three months when attending "public events" than I have since...ever? The reason, of course, is that I really don't want to look sick during my wellness campaign. I know my mother must secretly rejoice everytime she sees me for one of these events because I'm finally putting the effort into my make-up routine (I mean, I'm even filling in my brows, okay?) that she's longed for me to do since I hit junior high.

The truth is that it kills me to spend money on make-up, perfume, and a whole host of other "girly" things. Drop $100 on a meal? Sure, no problem. But do not ask me to spend good money on make-up. It really pains me. I haven't a clue why but it just does. Despite this, I do indulge in my Bobbi Brown concealer and pressed powder about once a year. The rest of it though, is cheap stuff and I mean, the cheaper the better. This includes my mascara, which until the past couple of months, I've rarely had to use. I was blessed with pretty full, long eye lashes (not as full and long as my damn brother's, though...) so when they're not under attack from chemo, they look pretty good with just a quick curl and some upper and lower lid eyeliner. 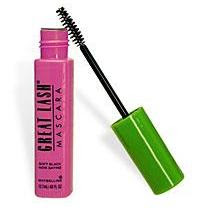 Recognize the pink and green tube above? I thought you might. In my attempts to plump my lashes up a bit, I've resorted to using the Maybelline Great Lash mascara I bought in CVS over a year ago -- the same mascara that is consistently written up in Allure and other beauty magazines' annual Best Bets list. Huh? Have any of you ladies ever tried using this stuff? Does it clump on you the day after you buy it? Is it really runny? Does it really not do that good of a job in thickening your lashes? It's a joke. I have no idea who Maybelline hired to manager their PR but they're brilliant at getting this crappy mascara good ink when in reality, it totally sucks.

My friend Melissa S. has recommended another reasonable brand to me: L'Oreal's Voluminous Mascara. Agree? Please speak up with your thoughts about this important subject when you have a chance. A desperate cancer patient with very thin lashes needs your help.
Posted by jmac


Who is this girl?