Late this afternoon my friends Christy and Tom welcomed their second child, Harper Sabine, to the world. It's rather ironic to me that today my friend since the fourth grade is holding her second baby in her arms and that later this week an INOVA Fairfax pathologist will hold my uterus in some sort of medical canister to try to determine what went wrong and just how wrong it all went. And while I keep telling myself that this is far from the final chapter, it's weird to see how things are working out for all of us, isn't it?
A little over a week ago I hosted a "sprinkle" (What's a sprinkle, you ask? I know, it's a new term for a lot of people. It's the small shower you get after your first baby...) for Christy. It was a fun gathering filled with many of our friends from junior high and high school, as well as Christy's first baby, Amelie. Here are some of the hightlights: 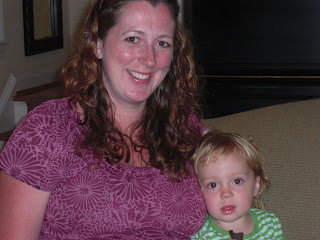 The guests of honor: Christy and daughter, Amelie. 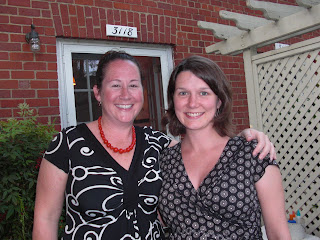 Our friend Kate and Christy's step-sister, Greta, who is expecting her first baby in August. 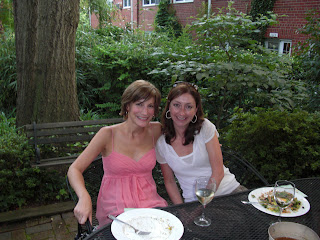 Me and Alison, who has gotten to know Christy well as a frequent Food Matters wine tasting attendee. 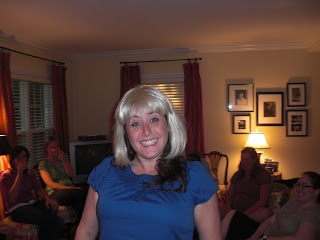 Melissa R. sporting my substitute wig, "Sally." She looks good as a blonde, doesn't she? 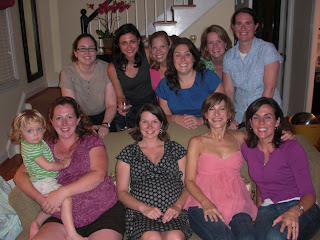 The whole gang: Amelie, Christy, Greta, me, and Kristin. Back row: Kelley, Christina, Melissa S. Melissa R., Claire, and a SPECIAL TREAT, Melissa M., who is back home following her last deployment. 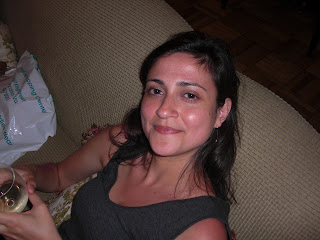 One of my best friends since junior high, Christina, who happened to be able to join us at the sprinkle because she was in town attending a work conference.
Posted by jmac